Everything to Know About Arizona Ants

Everything to Know About Ant Bites

Everything to Know About Fire Ant Mounds

The Grand Canyon State, with its mix of deserts and grasslands, is home to many different types of ants. It’s important for an Arizona homeowner to know the different ant species around them. This guide aims to help you recognize ant species in the state with ease, teach you how to stay safe around them, and serves as an introduction to properly dealing with infestations. 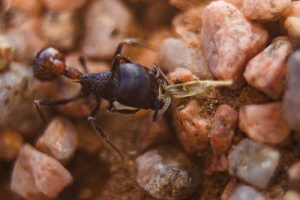 Ants are extremely diverse insects, so there are dozens of species you could find in Arizona. However, the varieties are generally divided into six groups.

Many people assume that fire ants are a single species, but they are actually a broader group of many species, each belonging to a slightly different region. Southern fire ants and desert fire ants are two of the most commonly found types in Arizona. All fire ants are hard to kill, aggressive, and prolific, out-competing other ants and insects and sabotaging their colonies. They are especially active near water and can grow their outdoor nests much faster after a rainstorm.

Fire ants are not commonly found infesting human homes, but they can easily take over a lawn or detached building, such as a shed. If you see a growing fire ant problem where you live, stay away from them and do not try to fix the problem yourself. If you do, you risk being stung. Fire ants have a very unpleasant sting that leaves painful, itchy blisters that last for weeks. In some cases, their venom causes a life-threatening allergic reaction.

Crazy ants are named for their quick movements and erratic, zigzagging patterns of movement. They are one of the smallest types of ants and are common in many places outside of North America. Although some species can bite, they do not have venom or other irritants, and their jaws are so small that many do not even realize when they’ve been bitten. The main issue with crazy ants is home infestation. During the colder months, they tend to wander indoors and set up a colony near food or water.

Another common problem with crazy ants is their fondness for electronics. For unclear reasons, the ants are attracted to devices that create an electric current, such as laptops, circuit boxes, and even car stereos. They are known to invade outdoor electronics, too, such as the circuitry for water pumps, until their presence shorts the circuit or damages the equipment. Indoors or outdoors, they can cause costly damage.

These are another very common group of ant species found all around the United States, including Arizona. They are named for their interest in old wood, and chew up dead trees. They do not actually eat this wood, but instead use it as the source of their nests. They tunnel through it and use displaced wood to seal up the nest. The damage carpenter ants can wreak in your home shouldn’t be your only concern if you spot them indoors. Carpenter ants can indicate a larger problem of rotting wood in your home.

Carpenter ants do not sting, but most species will bite in self-defense. Many carpenter ant species have an irritating acid they release when biting, which causes a burning and itching sensation similar to that of other ant bites and stings.

These bright orange ants are fond of hot, dry places but will also raid human homes and set up colonies in pantries, living off any stored food they can reach. This species is harmless but is still a common nuisance in Arizona homes. They are fond of sweet, sugary foods and are said to have a pleasant smell when squished. They should not be squished, however, because the sweet smell is a pheromone that attracts more ants.

Forelius ants are also know to be quite intelligent, deliberately moving dirt or other material to block the tunnels of competing ants. Another intriguing fact about this species is their defense mechanism. Instead of biting or stinging, they wiggle their bodies and antennae in an attempt to scare off threats or appease other ants.

Pavement ants, also called sugar ants, are commonly found on hot, firm surfaces, such as driveways, patios, garden rocks, or even a home’s foundation. Like fire ants, they have a sting for self-defense, but it is not as powerful and will not cause as much pain or itching. Still, some individuals may be allergic or sensitive to the venom of pavement ants.

Another type of ant that doesn’t bite or sting, is the perfectly named odorous house ant. They are fond of building nests in homes and, in contrast to forelius ants, they emit a foul scent, described as rotting coconut, when squished. Their small size makes it easy for them to slip through tight spaces and enter buildings. In general, odorous house ants prefer warm areas, places low to the ground, or places with lots of food, like pantries.

Each of these types of Arizona ants is different, and that means the solutions to an infestation will vary. For example, fire ants are almost always an outdoor problem, and different treatment options exist, such as bait or direct spraying. When it comes to crazy ants, forelius ants, pavement ants, and odorous house ants, prevention is crucial. Look around your home for any opening that a tiny ant could crawl through, such as an improperly sealed window frame or a ventilation pipe. Carpenter ants should be treated first, followed by a damage assessment and, if necessary, replacement of the rotted wood.

Ants are extremely intelligent insects, each species displaying different behaviors, strengths, and weaknesses. There also many do-it-yourself methods for dealing with ants, often involving citrus oil or other mild acids. However, professional ant pest control experts have the full scope of knowledge on what sort of treatments work best in each situation. Contact a skilled pest control team to fully protect your home and property from conniving ant colonies.

What to Do If You’re Bitten by a Fire Ant

Why Do I Have Pharaoh Ants?

Why Do Ants Fight?